The EP after the 2019 European elections: a vector for change?

Andrew Bradley sheds light on the outcome of the 2019 European elections and the role of the new European Parliament.

Andrew Bradley is scientific collaborator at Institute for European Studies of the Université Libre de Bruxelles (IEE-ULB) & associate research fellow at United Nations University Institute on Comparative Regional Integration Studies (UNU-CRIS). He is the former Director of the Office of International IDEA to the EU.

Some key observations on the outcome of the 2019 European elections point to the following:

A clear break with the decreasing trend in turnout over the last 20 years, suggests greater citizens’ interest and participation in the EU, and the calls for its renewal. Amongst others, climate/environmental matters, socio-economic questions, internal (ex. Brexit) and external (ex. Russia) challenges to the Union, a reinvigorated participatory youth segment of the electorate, and a sleek and smart campaign managed by EU institutions, including the use of social media, all contributed to increased participation, and a changed European political landscape. In terms of its composition, the 2019-2024 EP will be leaning slightly to the left of the political spectrum (this might change after Brexit as a result of the proposed re-distribution of 27 of the allocated 73 UK seats among 14 under-represented EU Member States), whilst it is also expected that the proportion of new MEPs will account for more than 60% of total members. As you will recall, with Brexit (if and when it happens) the number of MEPs will be reduced to 705 (from 751), with 27 of the 73 UK allocated seats redistributed to other countries and the rest (46) kept in receive for possible EU enlargement.

For the first time in 40 years, the two largest political groups, centre-left (Group of the Progressive Alliance of Socialists and Democrats [S&D]) and centre-right (Group of the European People’s Party (Christian Democrats) [EPP]), have fever than 50% of the seats together, while the Group of the Alliance of Liberals and Democrats for Europe + Renaissance + USR PLUS (ALDE&R) and the Group of the Greens/European Free Alliance (Greens/EFA) made gains, and could be potential king-makers to ensure a working majority in the EP.  This composition points to the fact that in future, there will be a need for deeper political debate to build broader/smart coalitions in order to reach consensus for effective parliamentary decision-making. It would entail greater cooperation across the political spectrum, more compromises, effective leadership, better articulation of EU values and norms, and the building of EU solidarity – all building blocks of a more mature form of parliamentary democracy.  Contrary to the view of many commentators, a more fragmented, pluralistic and representative EP would not necessarily paralyse decision-making, but should rather been seen as a strength of a maturing representative democratic system. With visionary leadership and political will, the effective functioning of the EP would be more likely. 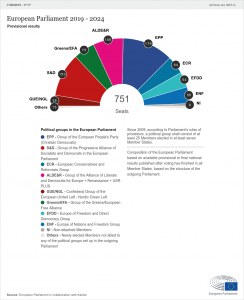 The trend in EU Member States is now also evident at the EU level, where the 2019 European elections saw gains and advances to the left and right of the political spectrum. The European Socialist (PES) and Christian Democrats (EPP) political families lost ground at the EU level to Liberals, Greens, Eurosceptics, Populists and Nationalists, thereby bringing greater political diversity to  the EP.  Breaking the centrist stronghold on the EP and bringing more fringe parties to decision-making at the European level could further strengthen representative and participatory democracy.

A sense of increased credibility, influence and legitimacy of the EP

With a higher turnout, more representativeness and increased pluralism in its composition, the only directly elected institution of the EU has the opportunity to further advance its credibility, influence and legitimacy as a democratic parliamentary institution.  Through the Lisbon Treaty, the EP consolidated its relevance and power at the heart of the EU over the previous legislature (2014-2019), and the challenge would be to now maximise the potential benefits of this enhanced credibility, influence and legitimacy.  A more credible and legitimate EP enhances the credibility and legitimacy of the Union.  To further build on its democratic representative functioning and prominence, the EP would be compelled to increase its role in the following three areas.

Presence and influence of Brexit

The Brexit impasse and debacle influenced not only electorate preferences in the United Kingdom, but it also bolstered many in EU Member States to cast a pro-European vote.  It will not be surprising if Brexit proves to be one of the main contributing factors to the higher voter turnout. On the other hand, the pro-European vote is also a signal that the EU is more than just about Brexit, and that voters would like to see greater and decisive leadership on challenges (internal and external) that face the EU.

Impact of European elections at the national level

The higher voter turnout did not dispel the notion that the European elections are seen as so-called “second-order elections”, compared to “first-order elections” at the national level.  In addition, it has always been viewed that the European perspectives of electorates are subject to the influence of national politics, resulting in the so-called protest, anti-establishment vote. However, in the 2019 ballot, the message for change from voters was mixed and at times contradictory. In the United Kingdom, the two traditional political parties, Labour and Conservative, were moved out of the top two rankings, in France, President Macron’s La République En Marche alliance was beaten, albeit narrowly, by the far right; in Greece, the opposition conservative party, New Democracy, outnumbered the current governing coalition, and in Germany, the Greens made substantive gains at the cost of the governing coalition – all signs of the so-called protest, anti-establishment vote. On the other hand, current political trends at the national level in countries such as Italy, Poland, the Czech Republic and Hungary were reproduced in the European elections. The debate on the importance of the European elections, being “first- or second-order” elections, will continue, but cross-pollination between politics at the European and national levels will surely continue to increase.

The perceived feeling in many EU Member States is that the EU is not protecting and/or acting in the interest of its citizens, hence the call for change through the ballot box. Centrists (grand coalition) have failed them, but citizens nevertheless opted to limit the influence of populist, nationalist and Eurosceptics in a world where democratic governance is being challenged on a daily basis. Broad pillars of the call for change include increased europeanisation of the political discourse, prevalence of pan-European issues and preferences, and calls for the EU to be more responsive to the needs of its citizens. The EU establishment must heed this call and start to promote progressive policies to issues of citizens’ concern and preoccupation. Prevalent amongst these are climate change, migration, ICTs, sustainable social and economic protection, inequality, demographic challenges (ageing population), and concerns of safety and security. Citizens also want the EU to play a leading global role on some of these matters, and in accordance with the obligations of the 2030 Agenda for Sustainable Development. Internal issues invariably influence the EU’s external reach. The external impact of the EU will be strengthened if its internal policies are synchronous with its citizens’ interests. Becoming a more prominent actor on the global scene can in turn buttress its original mission of peace, security and stability, and providing for its citizens.

Questions about the Spitzenkandidaten process

The process that provided the President of the European Commission (EC) in 2014, albeit not ideal, was meant to be repeated for 2019.  However, in the lead up to the European elections, some EU national leaders and political groups at the EP-level already voiced some reservations about it.  Now, with the implosion of the “grand coalition” at the 2019 European elections, it remains to be seen whether EU leaders will respect and repeat the process when electing the President of the European Commission (EC) in 2019.  The EP has a key role in the process of electing the President of the EC, and it will have to put down its marker very early on in its legislature so as to not be suppressed into a less significant role than in the past. Visionary leadership will be needed at all levels to respect the voice of the people (and the process) and further improve democratic representation at the EU level, while ensuring that the best candidate is elected to lead the EC.

A vector for change?

Through the 2019 European elections, consolidation and strengthening of democracy took place at the EU-level. Moving forward, the EP could be the vector for change to ensure that citizens’ interests are the primary preoccupation of EU leaders, while simultaneously  spearheading a more prominent EU role on the global scene.  These goals are concurrent with the ideals set out in the recent Sibiu Declaration[2] of 9 May 2019 on the EU’s common future.  A higher turnout contributes to the justification of the important role of the EP in EU policy-making. The EP now has the opportunity to take its rightful place as the key democratically elected institution at the EU level. Through effective and visionary leadership , it could pave the way for increased EU relevance and democratic legitimacy. Central to this is to ensure that inclusion becomes a key EU policy objective, whereby “inclusion” necessarily encompasses gender equality and inter-generational concerns.

The new direction and functioning of the EP will soon be evident through its handling of some key and immediate priorities: approval of the new Commission President by an absolute majority, vetting of the members of the EC, agreement on the EU multi-annual financial framework (budget) [2021-2027], conclusion of Brexit, and the future orientations of the EU under a new Commission and other European institutional leadership.

The EP undoubtably has an important role, and the success of the 2019-2024 legislature will be judged on its progress in addressing the needs of citizens, contributing to enhanced EU solidarity, and ensuring effective EU leadership internally and externally.

Interested in more in-depth analysis of the elections? Read also professor Mario Telò’s carte blanche The European Elections : the Risk of “Muddling Through”

Discover our Executive Master in European Union Studies with flexible schedule and classes in English!