Brexit and a New Future for Justice

On April 25th and 26th, the European Criminal Law Academic Network (ECLAN) will host a conference on “Brexit and the EU Area of Criminal Justice,” relating to the Université Libre of Bruxelles’ thematic year Europe of Knowledge.

The conference “Brexit and the EU Area of Criminal Justice” will aboard the difficult task of analyzing how the United Kingdom will continue its cooperation with the European Union, specifically in regard to police and judicial cooperation in criminal matters which form part of the EU area of criminal justice. To introduce the questions that will be addressed in April, Chloé Brière (PhD, Postdoctoral Researcher at the Institute of European Studies) weighs in on the debate.

Due to the ongoing and unpredictable nature of the Brexit process, the contents of the speakers’ presentations and following discussions  will be adapted to reflect  and address the current situation at the time of the conference.

What will happen to the relationship between the United Kingdom and the European Union after the date of withdrawal? Would EU instruments still be applicable?

“It all depends on whether or not the Withdrawal Agreement will be approved by the United Kingdom. If the text enters into force, after the UK’s withdrawal, we would enter into a transition period, that should last until December 2020. In practice, it would mean that 10 key EU instruments, such as the European Arrest Warrant, the European Investigation Order, (and) joint investigation teams, would continue to apply. However, in case of a no-deal Brexit, EU instruments would stop to apply. In that case, cooperation in criminal matters will have to be carried out on the basis of different instruments, such as the conventions adopted within the Council of Europe.”

Will EU actors, like Europol and Eurojust, continue to support  British authorities?

“Again, that will depend on whether or not the Withdrawal Agreement is approved. The text contains specific provisions regarding the continued participation of the UK in Europol’s and Eurojust’s activities during the transition period. This would mean in practice that the British authorities will continue to have access to Europol’s databases, or its secured communication system. They shall also continue to be able to rely on Eurojust’s assistance for the coordination of cross-border prosecutions. The general idea is to ensure that ongoing criminal proceedings reach their conclusion, and avoid that the UK’s withdrawal allows criminals to escape justice.”

After the end of the transition period, what is the anticipated future cooperation between the United Kingdom and the European Union ?

Their future cooperation will likely be influenced by the dynamics of the negotiations. There are strong indications on both sides, from the EU and from the UK, that they want to remain close partners in the field of security. However, there are uncertainties regarding the content and modalities of their future cooperation. The UK’s government is arguing in favor of (a) special relationship, which would allow the UK to keep the level of cooperation similar to what they currently enjoy as an EU Member State. For the EU (and the EU actors), the perspective is a bit different. The EU already cooperates closely with third countries in criminal matters, and this can be seen as setting a precedent for its future cooperation with the UK. But the level of cooperation it offers to third countries is much lower than the cooperation in place between EU member states. At present, there are little indications about what the future cooperation will entail, and it would be one of the interests of the conference to hear experts discussing this crucial issue.

Who should attend this conference?

Everyone with an interest for the EU area of criminal justice and cooperation in criminal matters (!). The conference gathers many members of the European Criminal Law Academic Network, which is coordinated by the ULB and two other universities, the University of Luxembourg and Queen Mary University London. ECLAN members will participate either as speakers and chairs, or as participants. In addition of renowned scholars, many speakers are practitioners, with a first-hand knowledge of the consequences of Brexit on the field, and we hope that the discussions will also interest practitioners, being either EU and national civil servants, judges, prosecutors, or policemen, who want to engage with experts on the consequences of Brexit for their work. And last but not least, students and researchers who wish to gain knowledge about the issue. 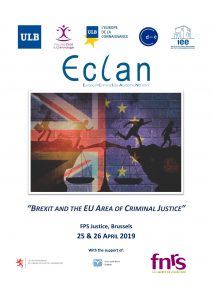 This event is organized by the Brussels ECLAN team, the Université Libre de Bruxelles, the Institute for European Studies, the Faculty of Law and Criminology, and the Centre for European Law. It received support from the F.N.R.S, the S.P.F Justice and the Ministry of Justice of Luxembourg.

The conference will be held at SPF Justice on Boulevard of Waterloo 115, 1000 Bruxelles.