Invited by the Institute for European Studies and the UK Mission to the EU, the Université libre de Bruxelles welcomed, last February 17th, David Frost CMG, UK Prime Minister’s Europe Adviser and Chief Negotiator, for a lecture about the future relationship between his country and the EU.

Explaining British Euroscepticism, attempting to convince Michel Barnier of Brexit’s added value and setting the tone for the upcoming negotiations on the future EU-UK relationship were some of the objectives of David Frost’s speech at the Université libre de Bruxelles last evening.

Englert expressed “the high level of worries about the uncertainty around the Brexit and of curiosity about what will be the future relations between Great Britain and the EU” particularly in the context of cooperation for research and education.

Mirroring 19th century conservative statesman Edmund Burke’s Reflections on the Revolution in France, Frost presented Brexit as the “most obvious example” of what he defined as the latest European revolution, that has come as a reaction to European integration: the “revival of the nation state.” To Frost, “Brexit was surely above all a revolt against a system – against as it were, an ‘authorised version’ of European politics, against a system in which there is only one way to do politics and one policy choice to be made in many cases and against a politics in which the key texts are as hard to read for the average citizen as the Latin Bible was at the time of Charles the Bold.”

Once a “typical pro-European,” Frost now adheres to the idea that “sovereignty is meaningful and what it enables us to do is to set our rules for our own benefit. Sovereignty is about the ability to get your own rules right in a way that suits our own conditions,” he said to an audience of mostly students and academics of the ULB and its Institute for European Studies.

The UK, said Frost, is not prepared to compromise on the fundamentals of their negotiating position. “We cannot be complacent about the Union in the UK, but I nevertheless believe that all parts of the UK are going to survive and thrive together as one country. In particular I am clear that I am negotiating on behalf of Northern Ireland as for every other part of the UK.”

He left no doubt as to the firmness of the UK’s rejection of all supervision by the European Union and said the UK is only looking after what “other independent countries have.”

“To think that we might accept EU supervision on so called level playing field issues simply fails to see the point of what we are doing. That isn’t a simple negotiating position which might move under pressure – it is the point of the whole project.” 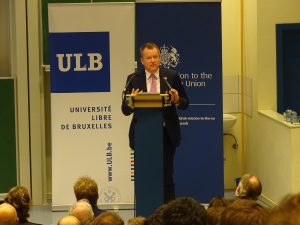 Frost showed optimism about getting a trade agreement by the end of the year – “we should take inspiration, I think, from the original Treaty of Rome back in 1957. This was negotiated and signed in just under 9 months – surely we can do as well as that as well as our great predecessors, with all the advantages we have got now? he said”.

To the question “How do you see future EU-UK relationship in this field? Economic competitors or a close partners? The Canadian model or the Australian model?, he stated that the UK has also found inspiration for the type of trade agreement it will pursue in CETA. “We are clear that we want the Canada-Free Trade Agreement-type relationship which the EU has so often said is on offer – even if the EU itself now seems to be experiencing some doubts about that unfortunately.” If those wishes don’t come true, Frost said the UK is ready “to trade on Australia-style terms if we can’t agree a Canada type FTA.”

Details of the shape the future relationship will take will be set out in writing by next week.

Drawing from historical figures like Charles de Gaulle “the man who believed in a Europe of nations,” the UK negotiator ended with a message for his EU homologue, Michel Barnier:

“Michel Barnier said in Belfast in other week that ‘Not one single person has ever convinced me of the added value of Brexit’. So, Michel, I hope I will convince you when you read this to see things differently – and maybe even think that a Britain doing things differently might be good for Europe as well as for Britain.”

Firm, Frost said there will be no delays in delivering Brexit. “At the end of this year, we would recover our political and economic independence in full – why would we want to postpone it? That is the point of Brexit.”

That’s how Professor Ramona Coman, President of the IEE-ULB defined Brexit, during her remarks as moderator of the Q&A that followed Frost’s speech. “As researchers, we open a new chapter to understand how the UK and the EU will work together in the future. As citizens we have concerns and many questions.” A chapter that will see 2020 as the end of UK research and academic cooperation that implies EU supervision, while over the last years, many higher education and research institutions from across the UK and the European Union have reaffirmed their commitment to working together

Addressing students and academics at the Université libre de Bruxelles, Mr Frost said: “It is central to our vision that we must have the ability to set laws that suit us – to claim the right that every other non-EU country in the world has. BBC, February 17 2020

In a major speech at the ULB Brussels university, he said that rejecting any EU meddling on rules and regulations “is the point of the whole project” of leaving the bloc after 47 years.NY Times, February 17 2020

Addressing Mr Frost said that an obligation to accept EU supervision on level playing field issues “simply fails to see the point of what we are doing”. He told students and academics at the Unversité Libre de Bruxelles (ULB) that that was not “a simple negotiating position which might move under pressure – it is the point of the whole project”.RTE, February 18 2020

In a significant opening to Brussels, Frost conceded that the negotiators would need to build on the models contained in other EU free trade deals. The Guardian, February 17 2020

“Obviously we will develop our own state aid system, our own anti-subsidy regime once the transition is over,” David Frost told an audience after delivering a lecture at a Brussels university. The EU wants Britain to accept its rules and regulations on state aid as part of a tariff- and quota-free trade deal to guard against unfair competition with a large competitor on its doorstep. Euractiv, February 18 2020

To help use all understand Brexit, in the context of negotiations of the future EU-UK relationship, we compiled a series of articles written by our academics and researchers and audiovisual materials on conferences and debates in English and in French